Book Review: The Probability of Murder by Ada Madison 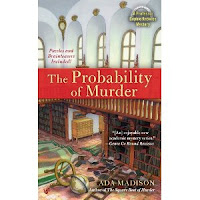 "The shiny padlock on Charlotte's bag called to me. I kept thinking about it, as if it were a logic puzzle I hadn't been able to solve.

On the other hand, Charlotte was gone forever and her bag was in my possession." (ch. 4)

Comments: For anyone who likes math puzzles, logic problems and brain teasers, this is the cozy mystery to read. The novel is peppered with them, as the main character Sophie Knowles, professor of math at a small Massachusetts college, does puzzles in her spare time or to while away the hours. That is, when she is not solving crimes. In this novel, Sophie tries to find out why her good friend, librarian Charlotte Crocker, was killed by being made to fall from a high library ladder. Also, Charlotte had left a duffle bag in Sophie's office, which contains an important clue to the mystery.

I liked the character Sophie and her friend Ariana, found the plot interesting, but think the book slowed down in the second half. There was too much detail, for instance, on Sophie's boyfriend Bruce and his mountain climbing accident in New Hampshire, and a few too many conversations with Ariana and detective Virgil. The ending was a surprise, however, and one I could not have expected, the mark of a good mystery.

I received a complimentary review copy of this book.
at March 08, 2012

I'm sorry to hear that this one was not totally satisfying, but the inclusion of the puzzles sounds pretty cool. I will have to consider this one when I need a cozy to spice up my reading. Great review today!

Thanks for taking the time to review The Probability of Murder.

I'm always grateful for feedback and -- if you approve - offer a chance to enter a drawing of a copy of the book to your readers.

Hmm, I'll have to think about this one. There's always such a fine line of how much detail cozies need to give. Maybe I'll let you take the bullet on another in the series before I commit (hehe). Thanks for a great review.

Certainly, Camille M. I'll be glad to post a giveaway contest for a copy of the book, and let you know the winner!

I have this one on my wishlist.

Camille M., I sent you an email to confirm the details!

My brain refuses to do math, honest.

This one doesn't sound like it would be for me. Thanks for the honest review.

Hi there! Thanks for visiting my review of the book Cinder by Marissa Meyer. You're right, the next book will be about Little Red Riding Hood but the author assures me the next books will continue Cinder's story line as well.

I love all the mystery reviews you do! That's my favourite genre!

I love cozies, and am always looking for new series. Usually I stick with culinary or book-related ones, but I am someone who always has several puzzle books that I am working from, so this is a must for me. Thanks so much, as I hadn't heard about this one before :)

Ha! I love puzzles even though I'm not very good at them. This sounds great to me...I'm off to check my library for a copy!