Welcome to the Sunday Salon.

About the book: Other Waters, a novel by Eleni N. Gage held my attention all week in between chores. In her acknowledgments, the author says, "Other Waters attempts to describe the struggle of being caught between two cultures. But I hope it also expresses the joys of being exposed to a number of different worlds." 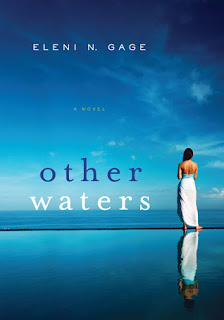 In the book, thirty-year-old Maya is caught between her traditional Indian family's expectations and her contemporary life as a psychiatry resident in a New York City hospital.  Maya keeps her American boyfriend Scott a secret from her family, only promising to one day introduce him to them. When a curse is put on her father in India by a distraught former live-in helper whom her grandmother had rescued from the streets as a child, Maya sees the sudden family health problems affecting her mother, father, and sister as a result of this curse.

With her best friend, Heidi, Maya takes the opportunity of her cousin's marriage in India to return to the country and confront the woman, asking her to remove the curse. Maya also does a traditional purging by bathing in the Ganges River, following the traditional belief that this will wash away her family ills. Things begin to look up for Maya when she meets another guest at the wedding - Raki, a suave and sophisticated Indian who works in finance in New York City. Raki seems to fit the bill as a new boyfriend - having the same culture and traditions as her family and someone she can easily bring home to her parents.

Reaction: Maya's decision to let go of Scott and turn to Raki is not as simple as it first seemed. What Maya does on her return to New York City and how she solves the problem of matching her needs to her family's expectations is an interesting turn of events. I am not sure that how the book ends is realistic for the character Maya and so I wasn't really pleased with the ending. However, the novel takes you on a journey to India that explains a lot of the culture, including the importance of the Ganges River and several of the gods in the Hindu religion. It also takes you into a traditional marriage ceremony at the same time as it shows the potential conflicts between marrying tradition and the modern. I rated the book 4/5.

Many thanks to the publisher for an Advanced Readers' Edition of this book.
at March 04, 2012

The youth of today, who have left their cultures behind... often have to face such difficult moments and decisions down the line. The original ties are never really broken.

Oh, I saw this one somewhere and it looks really good! Thanks for sharing.

I'm going to see if my library has this one. I love it when a book keeps your attention throughout the week! :-)

I read another review on this book recently and it too was very favorable -- glad u enjoyed this one.