My New Year's resolution regarding books is to write a review, no matter how short, of each book I finish reading in 2016. Here's my first: a cozy in a new series. 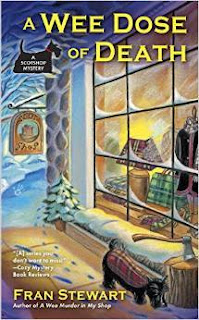 A Wee Dose of Death: A Scotshop Mystery #2 by Fran Stewart, to be released January 5, 2016 by Berkley
Source: publisher, for review
Objective rating: 4/5

ScotShop owner, Peggy Winn, sells kilts and tartans, scarves, socks and other Scottish items to tourists that visit her little Vermont town of Hamelin. Peggy and her best friend Karaline both have a secret - they can see and talk to a fourteenth-century Scotsman, a ghost that came with an old shawl Peggy had bought on a trip to Scotland.

Dirk the ghost can be made to disappear if Peggy should fold up the shawl, which she does whenever Dirk becomes bothersome. He doesn't like it but reappears again when she spreads out or wears the shawl over her shoulders. Dirk comes in handy as an advisor and a keen observer, and may even have healing powers in his cold hands. He helps Peggy solve the mysterious death of Karaline's old college professor, who was found murdered in a mountain cabin in the woods.

This was a fun read. The Scotsman ghost is a great addition to the plot and is very likable, as are the main characters, Peggy and Karaline. The Vermont woods in winter is made very atmospheric, as is the cross country skiing involved in getting through them.

There are many red herrings in the story, so it's great that it's hard to guess the outcome and the culprit(s). I did get a bit confused at the end when the mystery was unraveling and the people's names and identities became confusing to me. I think the final pages could have used some more editing, just a wee bit.

Overall, though, this cozy was very entertaining and makes me eager to read the first in the series.

Happy New Year, Harvee! I'm glad you enjoyed this cozy. I do not post about each book I read. Best of luck with your 2016 reading resolution!

For me, when it comes to cozies, I need it to be plot driven with well rounded characters. Sounds like it might fit the bill!
Best wishes with your resolution! What a great one to have!