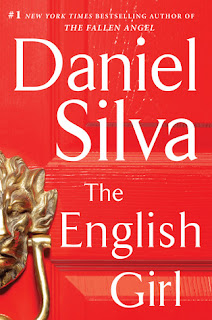 I finished The English Girl a few days ago, enjoyed the thriller, and can still remember it vividly. That counts for a rating of at least 4.5/5 in my book!

The English Girl to me is split into two parts. The first section is a hunt for the missing girl who is mixed up in a secret political scandal at the highest level in the British Government. The second part comes after the plot diverges dramatically, still involving the English girl, but following a different path.

I enjoyed the plot, the settings - Israel, Greece, France, England, and Russia - and the main character, Gabriel Allon, an Israeli spy who is tagged for a high position in his government once he has solved this mystery, resolved this conflict involving Britain and Russia.

An entertaining read. I'd like to read more of Silva's novels.

Goodreads description:
When a beautiful young British woman vanishes on the island of Corsica, a prime minister's career is threatened with destruction. Allon, the wayward son of Israeli intelligence, is thrust into a game of shadows where nothing is what it seems...and where the only thing more dangerous than his enemies might be the truth. Silva's work chronicles the adventures of art-restorer and master spy Gabriel Allon.