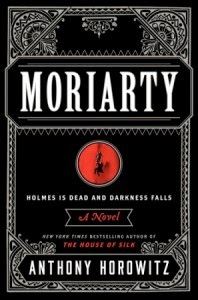 My review:
In the first Sherlock Holmes mystery by Horowitz, Moriarty dies in a confrontation with his enemy Sherlock at the Reichenbach Falls and is replaced by a new criminal mastermind. This new novel is told by Frederick Chase, a senior investigator with Pinkerton Detective Agency in New York. He it is who tries to trace the truth of what happened at the falls that day.

But what really did happen? The novel ends with a delicious twist that will have Sherlock Holmes fan waiting for the next in this series.


'We cannot be certain that this is Moriarty,' I suggested. 'You were quite correct when you said that I could not identify him. But can you?' (from ARE chapter 2; final copy may differ)

Lovers of Sherlock Holmes will love this new series that began with House of Silk.

Publisher description:
The game is once again afoot in this mystery from the author of The House of Silk, sanctioned by the Conan Doyle estate, which explores what really happened when Sherlock Holmes and his arch nemesis Professor Moriarty tumbled to their doom at the Reichenbach Falls in Switzerland. A riveting tale of murder and menace, Moriarty breathes life into Holmes’s dark and fascinating world.

Anthony Horowitz of London s the author of  The House of Silk and the New York Times number one bestselling Alex Rider series for Young Adults. As a television screenwriter he created both Midsomer Murders and the BAFTA-winning Foyle’s War, both of which were featured on PBS’s Masterpiece Mystery. In January 2014 he was awarded an OBE for his services to literature. Visit his website and connect with him on Twitter.

For more book reviews and the book tour schedule, visit TLC Book Tours.
I received an advance readers edition of this book for review.