Book Review: And When She Was Good by Laura Lippman 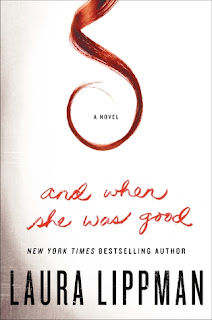 About the book: Helen drops out of school as a teenager and leaves home to avoid an abusive father, eventually becoming a well-to-do madam and changing her name to Heloise. She feels she must keep her young son innocent of his jailed father's existence and the real nature of her work. When people from her past threaten her and her son's future,  Helen does what she has to do to save them both.

Comments: I thought about the title of the book, "And When She Was Good," and about the first verse of Longfellow's poem and considered the author's possible intent:


There was a little girl, who had a little curl
Right in the middle of her forehead,
And when she was good, she was very, very good,
But when she was bad she was horrid. (from destinyland.org)

On the surface, Helen seems to be the victim of an abusive father and weak mother, the victim of a boyfriend, Billy, with whom she ran off, only to have to work on the streets to support his drug habit. She also becomes a victim of Val, who leads her into a life of prostitution.

But is Helen so innocent and blameless really? She manages to get rid of her abusers and her competitors on the streets and in her business, without ever seeming to lift a finger to deliberately hurt anyone. Things just seem to happen and work in her favor, even after she becomes a madam and raises her young son Scott in the traditional way, hiding her real source of income and profession from him and others relating to Scott.

I thought this was a nuanced psychological study as well as a good mystery novel, very well written to reveal the subtleties of Helen/Heloise's personality in her fight for survival and respectability. I would definitely recommend it for general readers as well as thriller/mystery lovers.

Laura Lippman wrote seven books while working as a reporter at the Baltimore Sun. She now is a full time fiction writer, author of two New York Times bestsellers, What the Dead Know and Another Thing to Fall. She has won the Edgar, Quill, Anthony, Nero Wolfe, Agatha, Gumshoe, Barry, and Macavity awards.

For a list of other reviews and tour stops visit "And When She Was Good" blog tour at TLC Book Tours.
at August 16, 2012

Email ThisBlogThis!Share to TwitterShare to FacebookShare to Pinterest
Labels: And When She Was Good, Book review, Book tour, Laura Lippman, mystery, thriller

My favorite mysteries are those with a psychological component, and it sounds like this is a winner! I though What the Dead Know was excellent and am looking forward to reading more of Lippman's work.Great review.

You won me over with the psychological element also, thanks for mentioning. She is on my Wishlist to try, I have the Green Raincoat as my intro to her.

I can't wait to read this one! I am getting it this weekend, and should be done with it fairly quickly. I do love Lippman, and her books are always some of my favorites.

I think this book would hold my interest. I have yet to read anything by this author, but I'd like to. Very nice review!

This sounds stellar to me! I read my first Lippman book last year and loved it!! Great review!

Wow, your review surely makes me want to read this one. It sounds great!

This looks good I like psychogical studies.
Are you considering attending Bouchercon in Cleveland?
http://stacybuckeye.wordpress.com/2012/08/14/bouchercon-2012-cleveland-rocks-wanna-come/

Glad you enjoyed this one! Thanks for being on the tour.

"I thought this was a nuanced psychological study as well as a good mystery novel, very well written to reveal the subtleties of Helen/Heloise's personality in her fight for survival and respectability."
You hit the nail right on the head with this observation, I think! Great Review!

I like the way you used Longfellow to illustrate what Lippman may have been trying to show about Heloise. Sounds like one I'm going to enjoy.