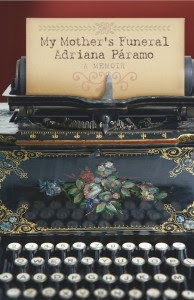 About the book:  Adriana Paramo, who had left her home in Medellin, Colombia to become an anthropologist, gets a phone call about her mother Carmen's sudden death and returns home from Alaska to attend the funeral. She and her four sisters and a brother, all older siblings who had remained in Colombia, meet up again to pay final respects to their mother, reminisce about her life, and claim sentimental items from their family home.

The book flashes back to Adriana's memories of growing up without their father, who had left them when Adriana, the youngest, was only five or six years old. The book explores Carmen's life, her marriage, her love for her husband before and even after he deserted her, and her raising six children by herself. All of this from Adriana's viewpoint as an impressionable child, then a rebellious adolescent and as an independent adult.

My comments:
A moving family story, expertly written, with the life and personality of Adriana's mother fully developed as creative nonfiction. Carmen came through as a determined personality who wanted more for her children and demanded more from them as well. She was successful in moving them on to a better life, where they could help both her and each other.The book was also very informative of Colombia's customs, dynamic society, and its volatile politics during that time period.

As the last of six children, myself,  I was amazed at how much I could relate to this narrative of the relationship between the mother and daughter. Adriana came to know Carmen more deeply as she had spent more time with her as the youngest child. As Adriana's brother said, Carmen was a different person and mother in the 1960s-70s than she was in the 80s when she had Adriana. I highly recommend this book on several levels.

Paramo has written another work of creative nonfiction, Looking for Esperanza, which has won several awards. I would really like to read that book also. Adriana Páramo is a cultural anthropologist, writer and women’s rights advocate. Her book “Looking for Esperanza,” winner of the 2011 Social Justice and Equity Award in Creative Nonfiction was one of the top ten best books by Latino authors in 2012, the best Women’s Issues Book at the 2013 International Latino Book Awards, and the recipient of a silver medal at the 2012 BOYA, Book of the Year Awards. “My Mother’s Funeral,” a creative nonfiction book set in Colombia, was released in October 2013 by Cavankerry Press.

Her work has been nominated three times for a Pushcart Prize and her essays have been included in the Notable American Essays of 2011 and 2012. She currently lives and writes in Qatar. Connect with Paramo at http://www.paramoadriana.com/

Thanks to TLC Book Tours and the author for a review copy of this book. Click on the link for more reviews by book tour participants.
- January 20, 2014